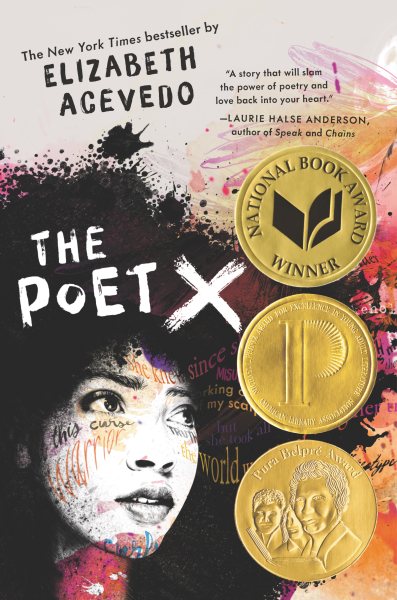 I was put off for a while by the book being written in verse, but I shouldn't have been, and you shouldn't either. It's fine. It's not versey-verse, it's more like spoken word. X, or Xiomara, is a teenager, a twin, a daughter of immigrants from the Dominican Republic, a kid without a lot of friends, a Catholic-under-duress, and a poet.

X and her brother Xavier were born after their parents had expected to have kids, and they, rather, Xiomara, weren't easy. I was shredded by this observation

When my mother's pregnancy was difficult,
and it was all because of me,

or worse
that I would kill her

From birth, X has the reputation of being "not easy." "Tú no eres fácil." A friend of mine recently brought up being confronted by teens who had been conceived in surrogacy. This friend had been decrying the renting of women's bodies. But now these renters were adults. X is a teen, but surely takes in how she is perceived as having been at fault in endangering her mother's life while she was still in utero.

Because it's a novel in poetry, the imagery is rich, like when X, unprepared, gets her period in fifth grade. She doesn't know what's happened until she searches the internet for "blood down there."

Then I snuck money from where Mami hides it beneath the pans,
bought tampons that I shoved into my body
the way I'd seen Father Sean cork the sacramental wine.

Dear dog. The wine is meant to be blood, after all! This passage is from a draft of an essay about "The Most Impactful Day of Your Life," and is not the version X turns in. Her teacher, Ms. Galiano, would probably have loved the story, though, even if she'd been disturbed by it. Ms. Galiano encourages X's writing, and sees her the way, it seems, no other adult has.

There are other evocative images, like Catholic incense turning X's belly into "bow tie pasta," and

And their words are like the catch of a gas stove,
the click, click while you're waiting
for it to light up and then flame big and blue....

There's also a bunch about Eve and apples, X's favorite food, often being sliced by her brother and offered to her like a gift.