Are You My Mother? a Comic Drama

I knew Alison Bechdel was brilliant, but I didn't realize she was so smart. Her memoir about her relationship with her mother is multilayered, in that it's about psychology, psychiatry, and psychotherapy; literature, feminism, and aging & menopause (maybe I'm reading these last two into it a bit), as well about how Ma & Alison Bechdel did or didn't and do or don't get along. 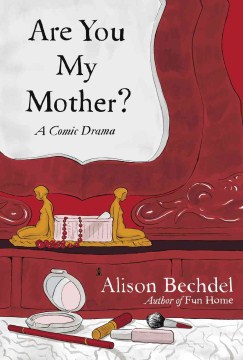 Although I'm neither as brilliant nor as smart as Bechdel, I relate to her story, especially where she illuminates Alice Miller's The Drama of the Gifted Child, which it seems is more about being the kind of kid who is oversensitive to her mother's needs, than about being intellectually gifted. This heightened sensitivity leads to feeling insufficient, or "erased," no matter how accomplished one might be. I feel threatened in the same way by others' accomplishments, that they negate my own, and also to some extent like mine threaten other people. I have a weird push-pull with competition, hating it, but needing to stay in the game. I put that red box around "Isn't that how it works?" because I don't know if I'm more amazed to see my own inner workings shared by someone else, or because I would have assumed that the line of reasoning was universal. I don't even want to think about what this means about my work/life identity.

"When I was eight, I began sneaking Mom's blusher.
"I was always careful to put the compact back precisely where I had found it.
"I liked how hale and hearty I looked with pink cheeks. Like a real child."
p. 214 not included in Google Books Preview--a revealing absence

The sequence expresses something I've often thought, but would never have articulated--the feeling that I was not a "real child" and am not a real person. I should say that as much as I admire this book and learned from it, it's not as enjoyable a read as Fun Home. I'm also disappointed that nowhere in the text does "...you are not my mother! You are a Snort." appear.

I just finished this. I never

I just finished this. I never had this kind of relationship with my mother, but I identify with a lot of what you called out here. It's hard to avoid those feelings of erasure.