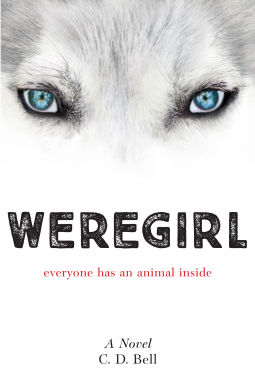 Weregirl was a welcome break for me after reading five adult books in a row. It grabbed me pretty quickly, but I'm not sure how long it was until I was reading to finish, rather than to see what happens.

The book's authorship is an interesting experiment, "created by a talented team of writers who conceived of and plotted it together, inspired by the working tradition of television writers," and the alias belongs to Catherine Davitt Bell. I'm not sure if she wrote the book based on the talented team's brainstorming, or if multiple people contributed to the text. There are times when it feels that way. The style is omniscient narrator, but it's in protagonist Nessa's head probably 95 or more percent of the time. It feels weird when all of a sudden her best friend or her younger brother is at the center.

The concept and plot are fine enough, a high school junior gets bitten by a werewolf and begins to transform. She has to keep it a secret, transitions at awkward times, develops some super skills, etc. What's a little different about this biting is that it appears to have been deliberate, that Nessa has something special--either innate or at stake--that is going to be important in the long run.

Speaking of run, Nessa is a cross country runner. Being a werewolf enhances her speed and endurance, which she doesn't seem to question, even after being accused of doping because her times increase dramatically. She's a poor girl with a single mom and needs a full ride to go to college, so maybe she doesn't want to get into a moral dilemma about her innate vs. enhanced running talent.

This is not a world where supernaturals are known, and no werewolf reaches out to Nessa to mentor her. Instead she relies on her mom's hippie friend to direct her to someone who can help. That person turns out to be an American Indian shaman named Chayton. Chayton is a little disgusted with his white girl charge and gives her the minimum assistance possible. I think he's not eager to be her "magical Negro." I'm curious what Bell's motivation was for having Chayton be Indian, whether she (they?) was looking to increase the book's diversity beyond Nessa's younger brother, who has autism, or if there are native traditions that she/they wanted to explore. Race is addressed head on, but I'm still not sure it transcends the trope of a white hero on a person of color's shoulders.

"The dust bowl--when white farmers began to know what it was like to be us."

Nessa felt like she should apologize or something, but Chayton was moving too quickly.

There are other examples, but I failed to book mark them. I guess I was moving too quickly at first. I won't get to think about that more for a while because the book ends abruptly, clearly priming readers for a part two. Maybe that's another television writer trick? It's not the kind of thing I particularly enjoy. I always feel manipulated and resentful.

Not to be completely negative, there are aspects to the book I enjoyed.

I loved the analogy of the wolf's tooth being the size of a house key, the visual, as well as the idea of it being the way into something.

There's a part where aftersomeone dies the scene is set with women as the default in a way that men often are:

Half of the town showed up on your doorstep bearing food, which they would heat up in your kitchen, serve and clean up after, send their husbands or sons outside to shovel your driveway, mow your lawn, and walk your dog.

I mean that does reinforce gender roles with women cooking and cleaning and men doing physical labor, but the construction of "half the town" essentially being the female half makes me chuckle.