This Case Is Gonna Kill Me

Vampires, werewolves, elves and lawyers are the dangerous creatures in this new series by Phillipa Bornikova (a pen name, so readers don't get confused between this and Snodgrass's sf novels). It's a fine read, though sometimes surprisingly amateurish for such a veteran writer. There are also typos and misspellings that the editors should have caught, like George M. "Cohen" for "Cohan" and "vise" for "vice," or the overuse of the word "saliva." (Four times denoting the narrator's hunger "Saliva burst in my mouth..." and only once a vampire's fangs.) So not to seem entirely petty, let me say that I like the protagonist because she's short. 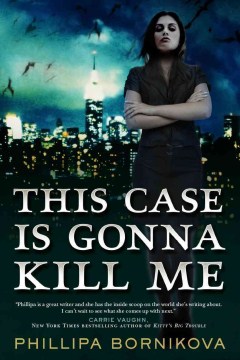 A handsome elf says "Women go to strip clubs for special occasions. Men would happily live in one." Is that true? Men are weird.

Bornikova uses the word "neotenous," which was new to me. It's a good word, meaning juvenile traits seen in adults.

I didn't mind the book while I was reading it, but I see from this review that I didn't really care for it.