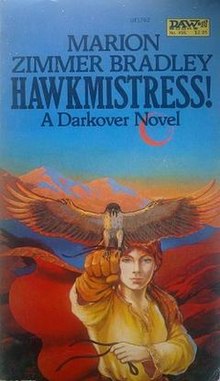 Romilly has the MacAran gift, the ability to communicate with animals. Too bad she's a girl, and so it's preferable that the have a give with needlework and whatever other girly things are in vogue among the higher classes on the feudal planet Darkover.

Hawkmistress is one of Bradley's best Darkover novels, even though (because?) it's not part of her favorite theme of outsider finding their way into Darkovan society and telepathy. Then again Romy doesn't know where she fits either. She hates women's work and the society of women, at least as she's known them growing up at Falconsward. Later she lives among men, as one of them, and isn't super keen on that either. You'd think she'd take to life among the Swordswomen, but meh. Like a lot of people who are great with animals, she prefers them to people.

As I've written in all of my Darkover book reviews since I learned that the author was accused of molesting her daughter, read through a lens with that knowledge, this book is creepy. While it's all about empathy with animals, there is also an aspect of taming or breaking them to get their love and obedience. Romy is aware of that inequality, and pained by it, but also moved by it.