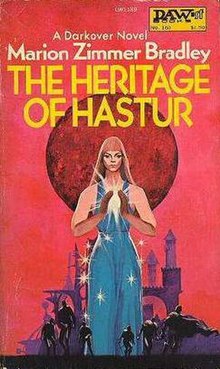 This feels like the first really mature book of the Darkover series, but it's also the most overwritten so far. It's 381 pages, but feels like 100 more than that. There's hella buildup for an event that doesn't even really get described. Still, it's a good backstory on Regis and Danilo, who figure prominently in many of the books that come after.

The eponymous heritage is a weight on the heirs, particularly Regis, the most powerful of them. He'd like to Atlas shrug and see the worlds. Much of the conflict of HoH is old ways vs. new: swords vs. guns. On the surface, guns have more allure, but that's because no one in generations has seen the power of the Sharra sword.

btw it's 1975 now, but Bradley is still a bit of a cave man about gender parity and rape culture. For those who are reading along with Bradley as incesting pedophile in mind, about the high priestess/head psychic ladies she writes, "They learned not to attract desires they dared not satisfy."

There's a piece toward the end where Regis and Danilo are struggling with their master and servant roles. They're two friends, each with his own burden, trying to make things easier for the other, and thereby risking both of their lives. Regis, who is ill, attempts to ignore is infirmity because he doesn't want to be a weight on his friend. Dani sees caring for Regis as his job, but also a necessity. If Regis can't keep up, they're both screwed.