Rediscovery: A Novel of Darkover 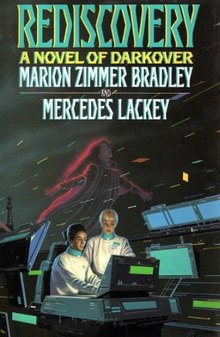 A couple thousand years after the radical luddite space travelers were stranded and made their home on a planet that came to be known as Darkover, they are found by what has become of their fellow earthlings: the Terran Empire. Some of the Terrans share qualities with the Darkovan nobility--red hair and psychic abilities. Both get them into trouble.

This installment of the Darkover novels, though co-authored, shares some themes with other Bradley works, e.g., that those who attract sexual attention are responsible to satisfy it. One of the Terran offices comments to another,

Nobody ever makes passes at me. I don't invite them.

The character who says that ends up dying when a male shipmate attacks her.

A theme I don't recall in previous MZB novels, so maybe it's Lackey's influence, is this declaration of heathanity from a noblewoman,

I have as much religion as a cat.

That got me to thinking about cats and their lack of spiritual reverence. Dog bless 'em!

Rediscovery is, like much of the series, engaging, but a hair overwritten, and some of the characters are cartoonish. There is a villain that is just awful. Nothing redeeming about him, and you can't understand how anyone tolerates him. The two narrators have a lot of depth, though, and when the novel is over, you want more. Ergo I ordered the next two books in the series from the Ivy League libraries in Barnard/Columbia's fancy consortium.