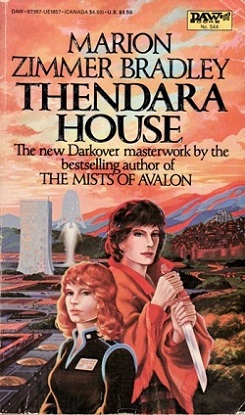 The renunciate novels are probably my favorite among the Darkover series. Maybe they're when Bradley and her uncredited co-authors are being the most real about themselves. Thendara House takes us inside renunciate training (renunciates or "free Amazons" are Darkovan women who have stepped out of feudal and gendered roles in order to take control of their own lives and destinies), which is more or less like a 1970s women's conciousness raising group. (TH was published in 1983)

And there's a dude in serious need of CR himself: co-narrator Jaelle n'ha Melora's husband Peter Haldane compares his struggle to shine at work with Jaelle and Magda (previously married to Peter btw) fighting for their literal, actual, physical lives. The bosses at Terran HQ where Jaelle is currently working are similarly clueless, especially the guy in charge, the legate, whom the entire staff, it seems, knows is a worthless jackass. I like, though, that Jaelle has some empathy for Russ Montray, understanding what makes him tick, even if he is likely to jeopardize her planet's safety and sovereign status.

Despite creating renunciation, a way for Darkovan women to be safe from the evils of men, MZB doesn't pretend the Guild Houses are perfect havens. She shows how women can replicate male/female dynamics in a detrimental way. One sympathetic character, Camilla, an "enmasca" who has risked a dangerous surgery to remove her female parts (1983 apologies to the more sophisticated 21st century understanding of gender), although a lesbian, seems to prefer the company of men sometimes to that of women, whom she views as more petty than men.

At times Magda, born and raised on Darkover to Terran parents, who is a hair more Terran than Darkovan, seems to think that Terrans have gotten over sexism.

Barbarian. Among the Terrans I could work among the men and no one would touch me unless I invited it.

For real? I guess this is MZB's fantasy world, but it still seems unlikely given the rest of the Terran universe she's shown, including Jaelle being called Mrs. Haldane against her wishes. There's also this MZB belief in well-bred people not arousing sexual excitement without being responsible for satisfying it. No means no, but maybe not after much smooching has begun.

Although TH is among my favorite Darkover novels, it's still a little overwritten, one of those books where you're like "I get it!" way before the characters seem to.