Owl and the Japanese Circus 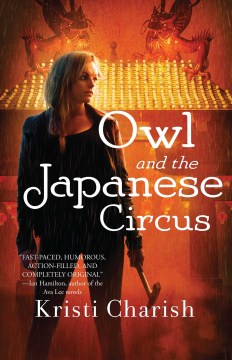 Owl is a wronged archaeology PhD dropout/kickedout turned thief-for-hire who has a personal rule never to deliberately involve herself with supernatural cases. She can read and write ten languages, but can't speak them. She's also got a weak spot when it comes to spotting supes, so of course her vampire, dragon, naga, and ghost entanglements are legion. To her credit, though, she is companioned by a cat named Captain, who goes with her pretty much everywhere, including first class airplanes and creepy crawly archaeology digs.

Charish supplies a substantial backstory, making you wonder if you're really on the first novel in the series. I still wonder if she's got some short stories where she's fleshed all the history with the Paris vampires that want to kill her even before the action of Owl and the Japanese Circus has begun.

I didn't bookmark a single passage. It's an action novel, with romance, kooky characters, and plot twists. Even though I didn't love it, I enjoyed it enough that I blew off the next two books in my queue to download the next one from Brooklyn Public Library.