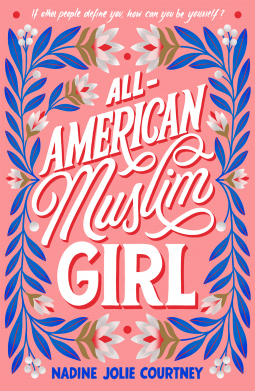 Allie is a Muslim girl of Circassian descent on her dad's side and some kind of Catholic on her mom's. She has red hair and doesn't look how Americans expect Muslims to look, and her anglicized last name, Abraham, doesn't give her away. Her mother converted to Islam, but neither of her parents observe Muslim religious practices or holidays. Dr. Abraham is a science professor with his first tenure track job after years of academic migrancy, and isn't interested in religion. Allie never was either, until an Islamophobic incident on a plane gets her thinking and wondering. She's increasingly conscious of the language gap between her and her grandmother, and then she starts dating the son of a professional bigot/TV personality. Allie finds a Muslim study group and begins educating herself about her religion's traditions.

Adobe Digital Editions crapped out on me. It didn't show me Allie's text or Instagram comments. It went tiny, and then it dumped my bookmarks, so I can't refer back.

My main takeaway is that it's a good story, likeable character, sweet family relationships, and refreshingly everyday about Muslim Americans. Courtney takes on the double job of educating and storytelling, and manages both well, though I look forward to a day when writers holding marginalized identities don't have to constantly explain and justify.