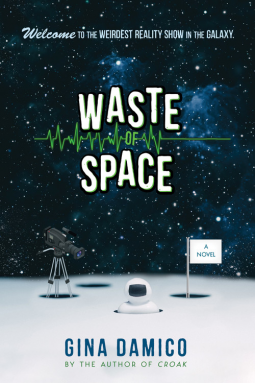 Waste of Space is a reality show produced and hosted by insenstive, greedy, TV magnate Chazz Young. The premise is that ten sizzling hot teens will be launched into space, competing for a million dollar prize. The auditions are shady, even pulling in a couple of unwilling cast mates, and it is eventually revealed that the whole thing is one big fix, if you can imagine that.

You know the only thing that's more pathetic than reality TV? The people who dedicate their lives to being cast on reality TV. Who measure their self-worth in terms of how much screentime and attention they get. You're not a person. You're an avatar. A username.

This from the show's youngest contestant, Louise, who worked harder than anyone to get on the show, though her reason for wanting to participate was different than the "you" she was speaking to, Clayton, Chazz's narcissitic entitled nephew, who got on the show because he had something on his uncle.

The novel's narrator, or documentarian, is a disgruntled intern on the show, who aspires to be a whistleblower. The main protagonist, though, is Nico, an Ecuadorian-American orphan who forges his brother's signature at his audition.

It's a fun read, but in many ways as lite as the kind of entertainment it's mocking.