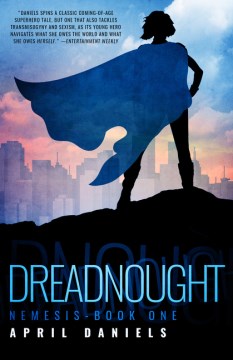 When a superhero dies in 15-year-old Danny's presence she gets what she's always wanted: a body that says "Danielle" to the world, not "Daniel." Oh, and also superpowers. Dreadnought is a funny and smart YA caper (pun!), but what's most notable about it it's matter-of-fact, late-2010s queer gender politics sensibilities. I'm not saying everyone suddenly embraces Danny's new gender presentation when she turns up a babe, but people respond in ways that are predictable, at least in the communities I roll in. Being transgender is a problem--for some people, though not for Danny--but it's not The Problem of the novel. It's a superhero story, after all; there's a bad person who wants to take over the world.

Like I said, the Nemesis series universe isn't much more hospitable to trans and gendervariant people than ours is. When we meet Danny, he's struggling.

The dirty little secret about growing up as a boy is if you're not any good at it, they will torture you daily until you have the good graces to kill yourself.

A couple of paragraphs later, "When I turn eighteen, if I haven't killed myself yet..." That's not idle; trans teens attempt suicide way more frequently than their cis counterparts. Daniels (ooh--just realized the author's name is related to her protagonist's) offers drive-by critiques of capitalism, too, like when Danny's doctor refers to a billionaire's superpower as "being rich." And a drive-by critique of dominant beauty standards, that include Danny's. Danny admits that her ideal woman's body (before inhabiting it) was that of a "photoshopped underwear model." (I love the lowercase p "photoshopped btw.)

The doctor is one of the few people who treats Danny well when they first meet her. The other superheroes provide a predictable set of reactions, from: queer solidarity at its worst (to retain corporate funding)(lol) to a full on TERF named--get this--Graywytch, possibly the second waviest/MichFestiest moniker possible. There is one nice superhero, but she's a straight woman that Danny has had a crush on forever. womp womp

I enjoy the observations Danny makes as she becomes accustomed to estrogen, like noticing things and having feelings. And she has impostor syndrome, of course, even though she has superpowers. That's so real.

Danny's one peer that fully embraces him, post-transition, is another person with enhanced abilities, Calamity. She's a working class hero who observes

"Ain't no peace without justice, hun," says Calamity. "I don't care why they sit up there in their little tower and let bullies like Bosco run around free. I just care that they do."

I have a bunch of other passages bookmarked, but I won't share them for fear of spoilering this delightful book for you.