Here and There: Leaving Hasidism, Keeping My Family 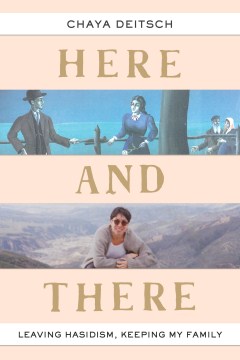 I do love a religious childhood memoir, so when my friend Kim R. Cody told me about it, throwing in that the author was a Barnard alum, I skipped the 550 page literary novel next in my queue and check Here and There out of the library immediately. HandT is neither the best nor the worst of the genre. It's a lot of Leaving Hasidism (aka "wearing pants"), but not so much Keeping My Family.

Chaya's upbringing wasn't as intensely religious as others in the Lubavitch sect, as she lived in Connecticut, not Crown Heights. She went to school with Modern Orthodox kids, with girls who did things like go to college and boys who wore crocheted yarmulkes.

But really it was probably the public library that ruined her for Hashem.

Books also provided entrée into all sorts of different worlds. My mother, herself a voracious reader, gave us close to carte blanche on subject matter. As a girl, she had walked to the main branch of the Brooklyn Public Library every Friday afternoon, leaving with armloads of books for the week. ... My only restrictions were religious--nothing about Jesus, Christmas, and nuns or priests, unless they were persecuting Jews, in which case I would be learning an important lesson about the untrustworthiness of goyim.

Her literary heroines ate lots of delicious sounding trayf food. Chaya wants her people to provide her sustenance, but she knows from an early age that Hasidism isn't for her. She goes along with it, and loves her family and friends, but never really feels it. Her friends make her feel like she was "choking on pudding." I love that image, that something creamy, benign, maybe even delicious, could be impossible to swallow.

When Chaya gets to Barnard she quickly befriends a couple of goyische girls who are bound together by a "severe case of impostor syndrome." That is #SoBarnard. I wonder how many Orthodox girls go secular while at Barnard?

One of Chaya's parents' final attempts to find her a suitable husband introduced her to this brainy hunk:

"Science is based on theories and experiments," he said excitedly, "but the Torah is absolute fact, given by Hashem to Moshe on Mount Sinai. So how can we say that the world isn't six thousand years old? Everything else is speculation."

That's when Chaya introduced the assembled to Nostradamus, which didn't go over well. No making the boys uncomfortable by showing off with worldly knowledge.

It's a quick read and paired well with the Satmar escape memoir I read last month.