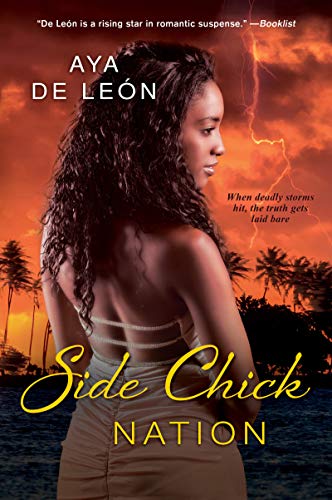 The fourth in de León's Justice Hustlers series, Side Chick Nation tells 20-year-old Dulce's story. Dulce, who appears in two of the other novels, is out of the mainland US because she's afraid of her dead pimp's brother. She is ancestrally Cuban and Dominican, but was born in Puerto Rico, so she can claim that heritage, along with US citizenship. In case anyone at all needs to be reminded, Puerto Rico is part of the United States. De León gives us a little history of the US's colonial and parasitic relationship with the island, including its usurious economic exploitation of a its taxpaying citizens.

Tbh Dulce is a bit of a mess. She didn't finish high school because when she was 14 she hooked up with a 39-year-old pimp, Jerry. Her self-esteem didn't have a chance. Free of Jerry at last, Dulce grabs opportunities and sugar daddies as they present themselves, even over a sweet Puerto Rican journalist she might have actual feelings for. The opportunity grabbing and sugar daddying find her stranded in Puerto Rico after Hurricane Irma strikes, removing all of rich dudes from the island, so when Maria comes, Dulce has little but fancy clothes and a small fistful of cash. It's a decent amount of money, but not enough to catch a surge-priced ticket to Miami, and her latest sugar daddy has his wife to think about, obviously. Dulce survives the hurricane on wit and tenacity. De León's telling of the Dulce and others' experiences is harrowing. De León writes that she started off with a different story, but she had to write about the hurricane, and her team went along with her when she changed course. SCN is a sexy romance--and so much more, just like the other books in the series.

I highlighted a bunch of passages, but Libby ate them. I'm returning the book to BPL right now, so pick it up yourself and see what all dazzles you.