Fat Girl on a Plane 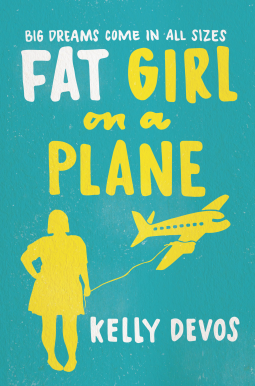 Fat Girl on a Plane is told in two timelines, both in the voice of Cookie Vonn, one when she is fat, and one when she is thin. Cookie's mother is a self-involved supermodel, and her father is a do-gooder doctor, saving lives in Africa (I don't recall if the country is ever named SIGH AFRICA IS A COUNTRY). Despite her mother's shit parenting (non-parenting, really; Cookie is raised by her grandmother), Cookie is drawn to an aspect of mom's profession: fashion. She wants to be a designer and dreams of attending Parsons.

Even after an unfortunate incident on a plane where fat Cookie meets her nemesis, a mean heiress named Kennes, and sets her mind to losing 200+ pounds (through a diet program called NutriMin and running five miles every morning), Cookie remains devoted to designing plus size clothes. Cookie is a good egg in a world full of scramblers. Even her loyal best friend (and crush) ends up betraying her in favor of someone very like her spiteful and needy mother. Her boyfriend does his best, dog bless him, but he lets Cookie down, too, and not just because he's a weakling and a creeper of an adult professional dating a teenager.

Relatable quote from the best friend,

"But you keep punching yourself in the face and hoping your mom will get a black eye.

I think that's how I was about both my parents, but maybe mostly my mom from the ages of about 15-35. And why I never could really love anyone/be loved by anyone until I found Eric and he was patient with me. Thank dog.

Everything in the whole place is the color of partially digested butterscotch candies.

describing the funeral of a famous athlete who had no friends in the end. I don't even know what to say about it because "partially digested butterscotch candies" makes me squirm. It's bland, attacked by stomach acids, not a candy most people between 10 and 70 want to eat, and the idea of faded butterscotch, when the rich yellow is all it even has going for it...yowza!

Cookie has another best friend, btw, an Australian girl she met in fat camp. Unlike Cookie, Piper stays fat, and when Cookie's skinny self finally comes to respect herself, Piper congratulates her,

You have become a Giver of Zero Fucks. Welcome to the best club on earth, my friend.