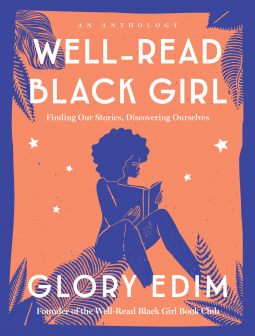 Edim brings together 21 writers and seven glorious bibliographies that address Blackness and representation in literature. If you're paying for the book, the bibliographies are worth the price. They include Well-Read Black Girl (website) recommendations from the last few years, Black girlhood, SF and fantasy, plays, poetry, and then a final listing of all the books referenced in the book.

In her intro, Edim lauds the joy of, not reading, but being a reader

Being a reader is an incredible gift, providing me with a lens to interpret the world. Most importantly, it has invigorated my imagination and allowed me to choose which narratives I want to center and hold close.

With the power to choose, I center and hold close narratives by women, non-binary, and trans people, with a special interest in fiction and memoirs by women of color. I share that not to position myself as a good, if passive ally, for two reasons: I want to resist the default white, male, christian, straight, etc., and I want to infuse my understanding of the world with the stories of people from other backgrounds and because they're really good. I'm a total hedonist as a reader, so I don't waste my time with books I don't enjoy.

Barbara Smith gets intersectional when she recounts attending James Baldwin's funeral. She observes,

...not once during a service that lasted more than two hours did any of the famous Black writers who eulogized him mention that Baldwin was gay. At his funeral, homophobia erased an essential part of who Baldwin was.

If you want to read her piece on Baldiwn's funeral, it's "We Must Always Bury Our Dead Twice" from Gay Community News. You can find it in The Truth That Never Hurts: Writings on Race, Gender, and Freedom. That's the whole thing, right? At the time Baldwin died, homosexuality wasn't discussed in polite company. The unpolite company conversation is what a default decentering reader is looking for.

Morgan Jenkins interviews Claudia Rankine who, changes the code-switching narrative by saying that when she has to go out in the world,

...it's the that the world interrupts her.

That's recentering! Rankine is the heart of her own narrative.

That's so beautiful to me. Care is love and activism combined, I think.