Hunger: a Memoir of (My) Body 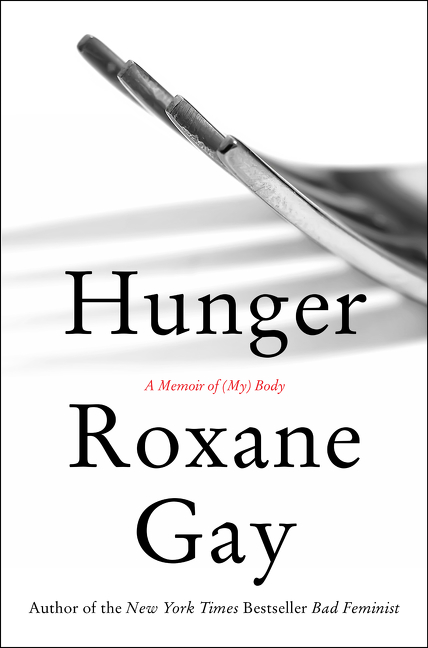 The cover image--a tine's up fork! I hadn't noticed because I read a digital galley with no cover? The fork, and its pointy, doom-evoking shadow give you one piece of Gay's theme--that her bottomless hunger is dangerous. But the side that really gets me is that while Gay is routinely pained and humiliated because of her weight, it feels better to be "super morbidly obese" than to be thin enough to be vulnerable. This is the aftermath of gang rape, led by a first love.

You may know that I am a fan of Gay's writing, and have read all of her published books. They are all raw--and still somehow funny and warm. Hunger is the the most naked of them, and maybe even the least polished, with some repetition from short chapter to short chapter, but still I read it with respect, awe, and sympathy.

I bookmarked 18 pages, so I'll spare you going through each one. I will share a couple few, though.

Here's what dazzles me the most about Gay. She can be deep in her pain, and she cops to her mean streak, but she can still extend love and sympathy to those in lesser pain, so to some less deserving of sympathy than herself.

After the [gastric bypass surgery] presentation there was a question-and-answer session. I had neither questions nor answers, but the woman to my right, the woman who clearly did not need to be there because she was no more than forty or so pounds overweight, dominated the session, asking intimate, personal questions that broke my heart.

I mean, a person of relative privilege in that situation could expect to be called out, but Gay saw inside the woman's hurt.

As she interrogated the doctors, her husband sat next to her, smirking. It became clear why she was there. It was all about him and how he saw her body. There is nothing sadder, I thought, choosing to ignore why I was sitting in that same room...

There are a few librarianly bits that struck me, like Gay's preference for the word "victim" to "survivor." I have agitated for the Library of Congress to change some of their terminology to "survivor," given some communities' preference for that designation. Gay, however, in many important ways has not survived her ordeal, is still victimized by it. She goes on to reference taxonomy, discussing how it is implemented (deployed?) to describe fat women.

She also takes on capitalism, saying that obesity is a problem because it's expensive and that "The Biggest Loser is an unholy union of capitalism and the weight-loss industrial complex" wherein "unruly bodies...must be disciplined by any means necessary." Like being overweight, or even super morbidly obese is akin to systemic oppression against Black people. (Gay is Black.)

But maybe it is. She recounts an emergency room visit for a sore throat where "the doctor wrote, in the diagnosis section, first, 'morbid obesity,' and second, 'strep throat.'" She will always be fat first--and Black, and never ever seen. The challenge is that not being seen is the point, as Gay reveals in a chapter about hiding in plain sight. She needs her body to be fat, to protect her, and her body has become a prison she made herself.

I wonder if Gay's boyfriend-turned-rapist has read her books. Will he read this one?