It seems like no one remembers or gives credit to the For Beginners series. Gladstone acts like no one has done a graphic history/politics book before, like this was some crazy new idea she hatched. Clearly I'm a little annoyed at that, but I started off liking the book plenty. The first page I dog-eared to quote says this "The American media are not afraid of the government. They are afraid of their audiences and advertisers. The media do not control you. They pander to you." 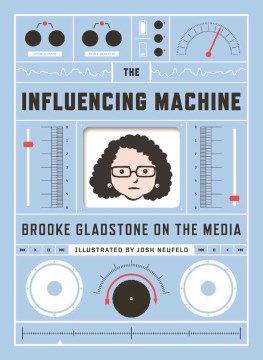 I was totally down with the book for the beginning part, the history. Gladstone shows how the media are the same as they ever were throughout western history. Where she started to lose me was the section on media bias that neglects to talk about race, class and gender bias, though she does talk about how retired army officers get a disproportionate say. And then she continues to quote a lot of white guys. They're really good quotes, but I would have liked a little reflection. She does address race later on in the book, but bizarrely, not gender, and it's about media consumers' associations, rather than how those associations are created and fed by media and their producers.

I also liked the first half (or so) better than the second because it is coherent. It is a history of media. The end of the book is, like the internet and lots of internet media, all over the place and trying to make a whole bunch of points add up to something they support, but don't lead to, if that makes sense.

Points for the several pages of notes. And here's a page from the book that you might like: Cats: Okay, that's really why I didn't like this book. No cats.

Oh, I loved the "For

Oh, I loved the "For Beginners" series. They were some of our best-sellers at Midnight Special bookstore in Santa Monica, where I worked in 1999-2000. "Structuralism and Post-Structuralism for Beginners" was very helpful for wrapping my pre-college head around those concepts. Bummer that the publisher's tagline is "Know More, Read Less."