Suits: a Woman on Wall Street 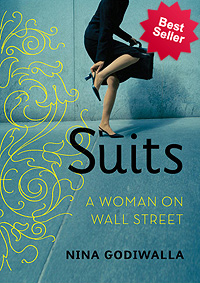 One of my neighbors left a galley of this book in the lobby of our building. I snatched it up becuase I have no clue what life might be like on Wall Street for anyone, much less a woman of color. I have to admit, though, I despise investment bankers. By the middle of her two-year sort of residency as an analyst at Morgan Stanley, it's not clear if Godiwalla would agree with me, but it's possible.

Godiwalla switches back and forth between the present day and her childhood in a suburb of Houston. Godiwalla is the third of four girls born to a Parsi (Persian India) family and feels driven to surpass the perfection her immigrant father expects of her. Her older sisters go the doctor and engineer routes, but Nina decides to take her skill with math in a different, unexpected direction.

Since I read the book in galley form, there were copy errors that might have annoyed me, but I appreciated Godiwalla's voice enough to not mind that she needed another edit. In the present day, Godiwalla is investment banking, first with a prestigious internship at JP Morgan that she won as a college freshman, despite the fact that she attended the University of Texas instead of a an ivy, and was female and of color and not a junior, like the vast majority of her peers.

She seems to take everything in stride, chameleoning between worlds, keeping her head down and not reacting to sexism, other than to give the occasional high five to a cohort member boasting about a conquest on the libertine side of the double standard. It's not that she isn't aware of sexism and racism.

When I first joined the group, one of my associates told me, "We had a girl on this team before. I remember seeing her crying once." She worked with you for two years and that's all you can remember? Their views of women were so limited that it made me even more determined to prove them wrong.

She doesn't call anyone on sexism, though, instead vowing that "They'd have to rip off my arm to make me cry within these walls."

She does lose her patience with an associate:

She goes on, trying to get across what about the associate's statement is bigoted, but he's too stupid to get it.

"You said you're from Texas," he snapped confidently as he laughed at the thought.

"You do realize that you can be from Texas and still be Hispanic, right?" I said as more of a statement than a question.

She gets called "the PC police" and scene. But this is toward the end of the book and the end of the straws Nina's back will stand. After a year of abuse--Nina seems to do twice as much work as the two male analysts in her group, is talked down to or ignored by her senior bosses and supposed mentors, and is under constant scrutiny and pressure to be perfect (just like in her childhood)--she finally admits that something is wrong and finds a way to get help.