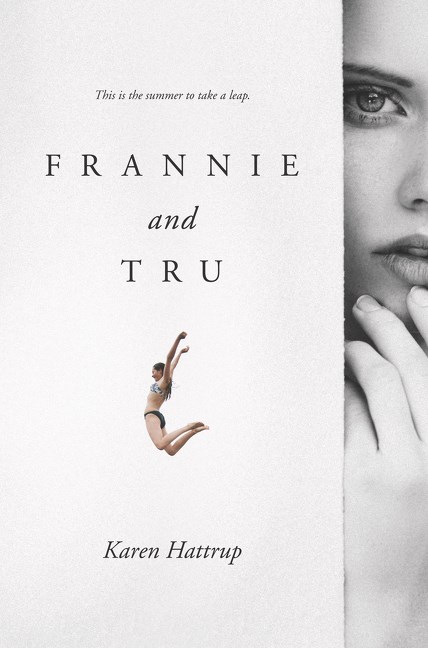 I read an advanced readers copy ebook, so I didn't take a good look at the cover until now. The innocent/asking-for-it face, the lightly clad leaper--ugh. I'm not sure I would have read it if I'd been paying attention.

The eponymous characters are Frannie, a lonely 15-year-old Baltimore girl in a transitional time in her life and her privileged 17-year-old cousin Tru, who is the 2nd gay person Frannie has ever met (to her knowledge). Frannie's family is in a rough patch financially, so in this summer between freshman year at a mostly-white Catholic school and a mostly-Black magnet school, Frannie is divesting her old friends and counting on Tru's visit to save her. Being a sheltered 15-year-old, she's also out to save Tru from persecution by loving him even though he's a homosexual. She also makes her first Black friends though Tru.

Sadly, Tru, while a lot of fun and better connected than Frannie is in the town she's lived in her whole life, is charming, but a selfish and withholding. Both teens grow up a little during the summer depicted and the year after.

Frannie has revelations like. "I'd never really thought of myself in those terms before, as a white girl. At least, I'd never felt that being a white girl actually meant something or mattered."

Here's a taste of Tru's trenchant personality, "'God, no.'" Tru said. 'The only thing worse than the Yankees are people who like the Yankees.'"

This Tru quote reminds me of something the pompous charismatic who lead my high school clique would say:

"And if you hate my movie, that's okay. I happen to think everyone is entitled to their own opinion."
"And I," Tru chimed in behind us, "am entitled to tell them they're wrong."

Ugh, makes me hate the high school male gaze all over again--or like I should have at the time, but didn't.

I'm being harsher on F&T than I mean to be. It is an easy read with some truth-telling moments that speak to me.

"In her wake, something passed between my brothers and me. For years the twins and I had shared not only a house, but the same school hallways, the same bus, the same playground, always aware of where the others stood, who they were at home and outside. But here was Sparrow, a spectacular friend I had that they knee nothing about. That meant we had secrets from each other now.

"From here on out, we always would."

I'm a sucker for that kind of melancholy.