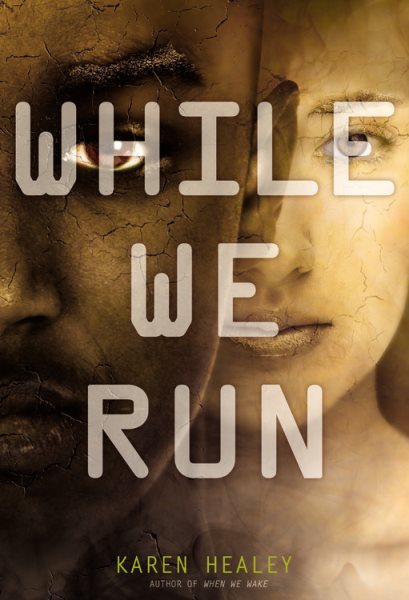 While We Run follows When We Wake, about six months after WWW ends, and this time it is told from the point of view of Abdi, a "talented alien" from Djibouti in Australia to attend the same prestigious school as WWR's narrator, Tegan.

Both teens are now in custody and shilling for a government project they'd attempted to expose and destroy. They are kept apart from one another, despite the government promoting them as a couple.

As you may know, I read few books written by men and subsequently few books with male protagonists. It can be strange to be in a man's brain, but the novelty of it makes it worth doing now and again. Abdi is 16 or so and an aspiring politician. His anger can make him impatient, but he also has training in diplomacy that helps him be chill...when it kicks in, which isn't always.

This is a novel about PTSD as much as anything else. Abdi and Tegan were tortured during their captivity, physically and emotionally, and they're both a mess. Being uniquely positioned (because of their inside knowledge and external images) to speak out about the issue, they feel unable to take time to process and heal from their ordeal. Instead, they press on, with their buddies from the previous book, and even some people they weren't so fond of.

As in WWR, Healey addresses issue of race, class, sexuality, and gender expression adroitly, but without turning the novel into an afterschool special. Even so, huge, life-affecting decisions are made based on characters' ability to feel safe in their diffences.

There's some good stuff on Abdi's intolerance for another character's political fervor. Bethari, though she's a lesbian of color, annoys Abdi like a straight white girl ally.

Bethari was so earnest it almost hurt to have her around. She was a political idealist--like Tegan, like me--but she seemed to have absolute certainty in the righteousness of her causes, which was both enviable and suspicious. She 'casted long diatribes against the ills of society and told every newcomer to our school to be nice to me.

Uh...I should probably pay attention to that.

This made me snicker, Abdi being a little ignorant and judgy himself:

"You two aren't from bushfire states," she said, which was news to me. As far as I knew, the whole of Australia regularly burst into flame."

Same with this passage. Am I terrible for often enjoying intolerance of religion in general (as opposed to religious intolerance)?

Well, my resentment at her telling me to think about the poor refugees was genuine. But the bits about Islam hadn't been about Bethari, but about growing up a nonbeliever in a country where most people believed as easily as they breathed. Tegan's religion didn't bother me quite as much, because Catholicism, ridiculous as it was, wasn't the religion I'd had to resist for most of my life.

I fully recommend both books, but would caution anyone with experience of certain kinds of trauma to use their judgment about reading this second installment.