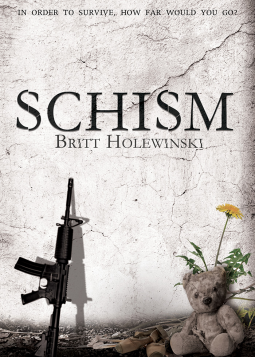 When a not-quite-ready-for-prime-time bioweapon is released and everyone older than 13 or so dies, it's Lord of the Flies meets tech startup culture (minus a lot of the tech because biopocalypse). Our hero Andy is living in (on?) Bermuda with her recently widowed father when the virus hits. Luckily she's got two close friends (siblings from England: Morgan and Charlie) with whom she weathers the first five post-adult years. When a Bad Thing happens, the three of them make for mainland America where they make some friends and some enemies.

While I'm annoyed with this inaccurate characterization of anarchy, "The strong prey on the weak," this debut novel by an ex-CIA agent is compelling and not at all rah rah-USA. It is a wee bit racist, though, with a dearth of characters of color and one of the few--a Mexican drug heiress--is described as "exotic...sultry."

At one point several of Andy's party are holed up in an Ivy League library, which is actually quite useful in a world without the internet. Reading about their hunt for basic information gave me pause about my anti-print reference book zealotry.

I'm eagerly awaiting the next installment, which I'm guessing is still a year away.