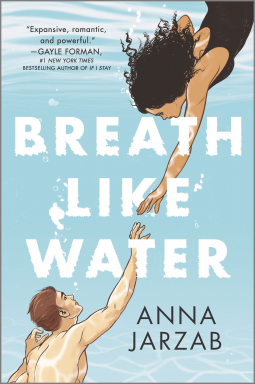 Interesting how on the cover Susannah seems to be rescuing Harry, but for much of the text, the help seems to be mutual or going the other way. Harry comes off as a typical YA perfect boyfriend, until he discloses his psychiatric diagnosis. The love story between the two is a co-star in this sports novel, though. Susannah won a swimming championship (national or world, I forget which) a little over a year ago, when she was 15, and before she had a growth spurt that turned her body into an alien.

She spends all her time in the pool, driven by an ogre of a coach, trying to get to the Olympics. Along the way, she meets a guy. He calls her Susie, which tbh annoyed me because the nickname seems diminuating and dominating, but whatever. That might be what Susannah likes, given her devotion to the ogre, Dave.

Susannah never lets up--or lets her guard down, until the combination of Harry and a coach with a different style come into her life. It's a believable and affecting story of the sacrifices a person and their family make in order for the person to strive for their goal.