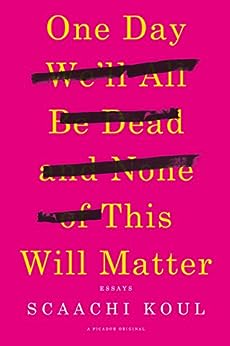 Koul's essays are funny, acerbic, and socially concious, and in a way her book is not dissimilar to Gabourey Sidibe's This Is Just My Face, which I read two books before ODWABDaNoTWM. A striking difference is that Koul's temper is mammoth. Sidibe jokes about wanting to fight infants that stare at her, but I don't think slights are as funny to Koul, even if she laughs them off, too.

Koul's dad is a primary character in her book (and her Twitter feed). He's a big rager--and funny, too. He's also a brown man in Western Canada.

When I talk to Papa about the microaggressions I deal with in my city ("The lady at Starbucks thought my name was Vissagi, and now she keeps writing 'Vissagi' on aaaaaall myyy cuuuuups"), he rolls his eyes because he's seen worse. My dad can't pass for white -- he is the darkest in my family, with the most Indian nose -- so my coffee-cup issue is hardly a problem for him.

The rage thing--she responds to all her Twecklers, or did, until things got ugly enough for her to deactivate her account for a few days. That was after a tweet soliciting pitches from "non-white non-male writers" yielded a shitstorm of abuse.

"We are deeply afraid of making marginalized voices stronger, because he think it makes privileged ones that much weaker."

But that's not what I mean by rage. This is:

My parents have renovated their home significantly in the past decade: ...I just found out where [my mother] put the bowls and their new location feels like such a personal attack that I can barely talk about it without raising my blood pressure.

There's an essay, called "Hunting Season," that is about how women are preyed upon and rapes of drunk women don't just happen; they're planned. She writes about two incidents where she was being surveilled by would-be rapists.

And yet, being surveilled with the intention of assault or rape is practically mundane, it happens so often. It's such an ingrained part of the female experience that it doesn't register as unusual. The danger of it, then, is in its routine, in how normalized it is for a women to feel monitored, so much so that she might not know she's in trouble until that invisible line is crossed from "typical patriarchy" to "you should run."

Yes, all of that.

The throughline of the book, what holds together the anecdotes about family, visits to India, moving away for college, her white boyfriend, racism, sexism, etc. is her relationship with her niece Raisin, which is nuanced and sweet.

PS Thanks A.j. Michel for passing this book on to me. I'll pay it forward at work.

PPS The "note about the type" calls Neue Swift an "assertive type...with robust serifs." Can I get a job describing typefaces?!?