10 Things I Can See from Here 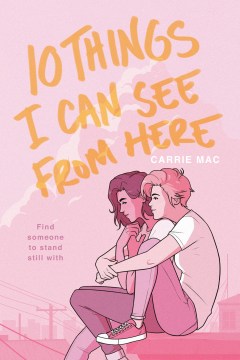 Maeve Glover is anxious, as in the 3% of the population for whom anxiety is all-consuming. She's also still in her teens, and her parents don't want her on medication until her brain is fully developed. That means Maeve gets to write neverending obituaries in her head as she catastrophizes inidents and challenges that are No Big to a lot of us, even those of us who have anxiety issues.

tbh it can be hard to take at times and makes Maeve harder to sympathize with than other heroines. Somehow she attracts the attention of a Salix, who is pretty perfect, down to the rainbow sticker on her violin case. Maeve knows she's a lesbian, but whether it's anxiety or an immature gaydar, she's glad to have a signifier.

Maeve's dad, a recovering alcholic and drug addict, and Maeve's mom, physically absent because she followed a boyfriend to volunteer in Haiti are problematic, but at least Maeve has an awesome stepmother, Claire. This passage made me laugh,

"Of course, baby. Of course." Claire set him on his feet and looked up at my dad. "Will you please take him outside for some fresh air? Go across the street and buy him a chocolate bar." She said it so formally, but instead of sounding polite, it sounded like Claire was really telling him to take Owen across the fucking street and get him a fucking chocolate bar, and by the way, fuck you.

It's that "by the way, fuck you" that made me snicker.

Anyway, Claire's struggles and how hard they make it for the reader to sympathize are the point, I think. Living with a serious anxiety disorder, like any chronic illness, is hard. Here's how she describes part of it,

I sat on the toilet for a long time, staring at the red emergency button on the wall. I wanted to press it. But it was for the wrong kind of emergency. Dad was messing up. Claire was angry. Corbin's arm was broken. My mom was in Haiti. I even lost the girl from the bus station to the ferry. It all felt like an emergency.

I guess Salix isn't 100% perfect because Maeve does have to explain to her that her anxiety is different from other people's, even if other people's concerns are potentially more grave, like Salix worrying about her mother's cancer coming back.

Recommended for its depiction of anxiety and its matter-of-fact lesbianness.