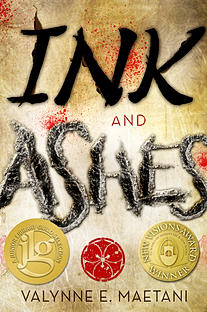 High school junior Claire Takata lives in a world of boys. Her clique is her older and younger brother, their next door neighbor Forrest, and their down-the-street neighbors Nicholas and Fedele. The friends are Japanese, German, and Italian and so began calling themselves the Axis Powers before they understood that wasn't exactly the way to make friends in America. No one outsider their circle knows about their name for themselves anyway. I think it's interesting though. They're not challenging Allies in any way that's immediately obvious to me. WHAT DOES IT MEAN?

Anyway, the Takata kids lost their father ten years ago but were soon adopted by their mom's new husband, a man they call their dad. When she finds a letter in her father's journal, Claire realizes that they don't know squat about their father or their dad's real backgrounds. She's the kind of kid who is not okay not knowing. It turns out her father was Yakuza and knew her dad better than he let on. Danger ensues.

Claire is a likable heroine , independent and strong, yet completely enmeshed in and supported by her family and friend group. She plays soccer, practices self-defense, and learned how to pick locks.

The mystery/thriller elements are compelling and more or less plausible. The plot is infused with Japanese and Japanese-American culture, rituals and superstitions. Maetani is a We Need Diverse Books team member and does a good job of including characters of color in a way that feels organic, rather than calling attention to itself. The heroine neither just "happens to be" Japanese nor is written to seem to be obviously conforming to or resisting stereotypes. Maetani doesn't ignore race and, through Claire, chastises the million microaggressive racist and sexist things teens (and others) say to each other under the guise of humor.