A House for Happy Mothers 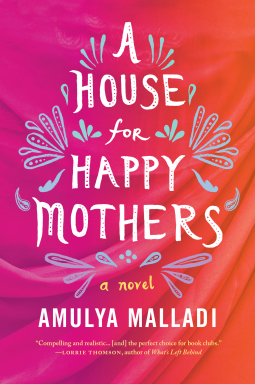 This is a story about two not-so-happy mothers. Priya turns to surrogacy after her efforts to conceive result in miscarriages. Asha turns to surrogacy to make a better life for her son. Priya has an Indian mother and white father. She is married to Madhu, an Indian immigrant and lives with him in San Francisco. Asha, her husband Pratap, their two children, and sometimes Pratap's mother live in a hut in a Telugu village.

Madhu is wary and and Priya's mother Sush critical of Priya's decision. Even Priya expresses concern, saying during the first trimester of Asha's (her?) pregancy, "I'm the one who outsourcd this." Her painful desire to have a baby at first hardens Priya against the possibility that what she's doing is exploitive, even, especially, when her mother won't let up about it.

"She [the surrogate] walked into this with her eyes open," Priya had said.

"But did you?" Sush had asked, and Priya didn't have an answer.

Sush, a professional do-gooder (she's an executive in a nonprofit), seems awful at first, but by the end of the novel, the only woman who truly seems contempt worthy is the doctor who runs Happy Mothers, makes twice what the surrogates do, and takes additional opportunities to exploit the poor women.

"You," Keertana said "That is in the contract."

Asha, who seems mild-mannered enough that she's one of the three surrogates selected by Dr. Swati to appear in a documentary, is dubious. "Oh, like they'd tell us the truth. They'll just let me die and let my children grow up without a mother."

When Priya arrives in India two months before her daughter's due date, she begins to question the process for real and feel genuine concern for her surrogate. But like a wealthy American, her answer is to try to solve the problem of the one person she's connected to, with money. Her family friend Mona cautions, "No, no more money. People think giving money is the solution. It's not. Giving tools is the solution."

Later Mona says, "You look at the poverty in India and you think it's so massive, so huge, there's nothing we can do. But I believe that we can make a difference, one child at a time, one mother at a time."

Ultimately that is what Priya and Madhu do for Asha and her family. They save Asha's 5-year-old son Manoj, getting his IQ tested (160) and getting him into a good boarding school. The book concludes with Priya and Asha as equals, each having given the other's child life. But though I was stimulated by and engaged in the novel throughout, Malladi lost me with that last sentence. I'm rating the book highly recommended despite my sociopolitical disagreement with the last sentence.

It may be that Priya changed Asha's son's life, it remains to be seen if it's for the better. It will almost certainly be better by western standards, but Manoj is sure to grow away from his parents and sister, likely even leave the country as Madhu did. But all of that is his choice. What really bothers me is the Malladi's contention that the exchange "elimiated the social and class differences, made them sisters, mothers--made them equals."

I don't see the equality there. It's possible Priya could again hire a surrogate. It seems less likely that Asha would again serve as one, but her family's needs will never be met, so who knows? And finally, while Asha's sacrifice is clear, what did Priya give up?