Surpassing Certainty: What My Twenties Taught Me 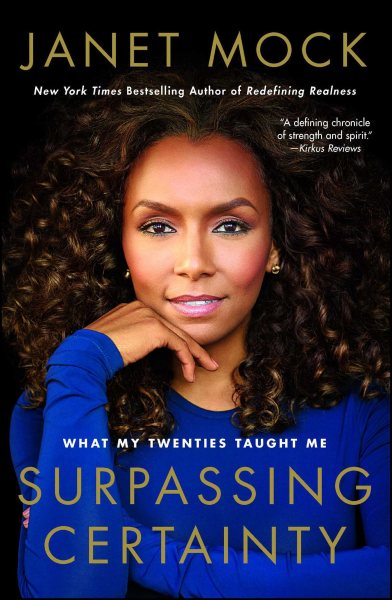 We meet up with Mock again when she's a college student, dancing in a club to pay her expenses at the University of Hawaii. At 19, she's had top and bottom surgery and learning confidence in her body. Stripping and bonding with other women help her come into her own. She also meets a guy there, a Navy man, who is an important part of her journey.

Mock takes apart male comedians like Chris Rock's take on strippers. Throughout the book and her twenties, she's developing race and feminist politics, but by the time she's writing this memoir, she's woke af and her arguments are masterful.

At UH she gives up on pre-law and embraces her love of fashion and popular culture. She's the first in her family to graduate from college and makes her way to NYU's journalism school to become the first to earn a master's degree. Mock reports on her jobs and friendships, and the other women of color who sharpen her intersectional analyses.

Her story is also a millennial tale of young life on the internet, with lots of IMing and helping to update a magazine's web presence. She's a young woman in NYC, first living in the East Village with roommates, one of whom she eventually can't abide, then moving to Astoria for her first solo apartment.

Being Black and trans is always part of who she is, but anyone who spent their 20s in NYC should be able to relate to Mock's struggles.