Out Behind the Desk: Workplace Issues for LGBTQ Librarians

One always has to get out of the way that most collections of essays, poems, stories etc. by different authors are uneven in quality and style. I think in this case, more than some others, one's preferences will vary widely. The chapters range from personal diaries to conference presentations, so readers will love some pieces and dislike others, depending on their literary tastes. As a perzine and fiction girl I expected the confessional stories to grab me the most, and some of them did, but I found that the most appealing pieces to me were those that rode the line between scholarly and personal. 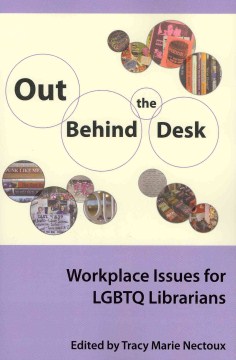 In the "this is how it was for me category," one of my favorite contributions is from K.R. Roberto. I've known K.R. a long time and contributed to two books of essays and a festschrift he edited, but I don't recall reading much of his own writing other than a zine he made 13+ years ago, long before the events described in his chapter "Passing Tips and Pronoun Police: A Guide to Transitioning at Your Local Library." I knew I was in for some good reading, from this sentence that opens the second paragraph of the piece:

I was raised Catholic by a couple of depressive fatalists, so it never occurred to me that I could change anything about myself; even if it had, my childhood was traumatic enough that I quickly learned to live in my head in order to avoid anything resembling reality.

Bonus points: note the appropriate use of the semi-colon! And here's a quotation from Lia Friedman's "Outness and Social Networks: From Closet to Container Store" that made me snicker when I found it in her scholarly-toned essay:

Think about it: did you avoid sharing those pictures of you and your partner at Pride on a work-connected account out of fear of retribution, or because you both happened to be wearing assless chaps?

Lia is another friend, as are a few of the book's contributors, its editor, the series editor, and the cover designer. What can I say, it's a small, gay library world. You'll be pleased to note that the authors represent a diversity of age and attitudes. I was particularly moved by some of the stories of coming out in times and places when the dangers associated with being out were greater than they are in this time and place.

The only criticism I care to make is that the index is disappointing--only three pages for a 266 page book. Many writers cite being influenced or helped directly by Ellen Greenblatt, who wrote the foreword and is not included in the index. It also seems to me that there are more references to the Gay, Lesbian, Bisexual, and Transgender Round Table of the American Library Association (GLBTRT) than are indicated in the index. Missing are terms and phrases that would be useful to researchers like academic librarianship, book displays, cataloging, collection development, Gay Straight Alliance, Pride, and queer.

Despite my complaint about the last three pages of the book, I recommend that you check out pages v-266 for sure.

This is a must read for LGBTQ

This is a must read for LGBTQ library staff and their allies.