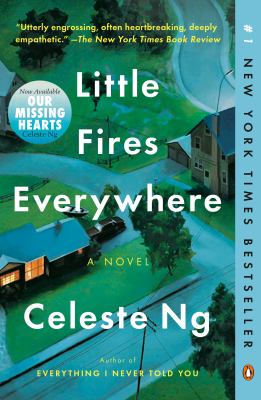 Two girls, about the same age, admire each other's opposite-seeming lives. Pearl is an only child, who has lived an itinerant life, but her mother, Mia, says they're staying in Shaker Heights for good. Izzy is the last of four kids, and has troubled her mother, Elena, since before Izzy was born. She's unstable in a stable home and comes to admire artist Mia and fantasizes about being her daughter instead. Pearl, on the other hand spends most of her time at Izzy's family's house, having become best friends with Izzy's brother Moody, and later their older siblings, Lexie and Trip.

The turning point of the story involves another set of mothers fighting over one daughter. The baby is the biological child of Chinese immigrant Bebe, who, impoverished and malnourished left her at the police station. A white, infertile, and well-to-do took the baby in and is attempting to adopt her.

Race is less central to the primary characters, who are white, but not invisible, despite what Lexie, whose boyfriend is Black, would like to believe. The white presumptive mother, in her youth, was formed by seeing "matinees of Song of the South and Anna and the King of Siam at the cinema at Shaker Square..."

Ng's story is multilayered, and her writing is delicate and surprising. I was dazzled by this sentence, about a pregnant teen.

She curled up on the bed, feeling small and pink and tender as a cocktail shrimp.

I don't even know how to unpack that; it's just so visually stimulating. Same with this description of another expectant mother.

And this bit of backstory, about Mia's older brother, is brainscratching.

I love the idea of a kid thinking of "later" as "grown up." I love that as an inside joke between siblings. As always, my review of a book I loved sucks. Sorry bout dat.