The First Rule of Punk 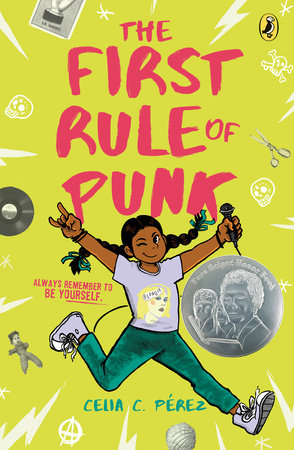 Full disclosure: the author of this novel is my best friend. But one of the reasons I love Celia so much is because she's smart and talented. I've always loved her for her writing, as well as for her intersectional identities: zine maker, librarian, Cuban, Mexican, punk, mom, dog companion, curmudgeon, reader, etc.

Celia's protagonist, Malú, at 12, is not yet hip to intersectionality. She thinks she has to choose: her SuperMexican mom, or her white punk dad and all that her divorced parents represent in her life. Malú's mom gets a two-year visiting professor gig in Chicago and moves the two of them there from Gainesville, Florida. Malú is pissed about having to move, and slips an 11th hour There's No Place Like Home zine she made into her mom's handbag the night before they're supposed to go. Spoiler: it doesn't work, and pretty soon Malú is unpacking per band posters and zine-making supplies in her Chicago bedroom.

I'm not sure how to write about this book because it's just so powerful and warming both, and it's possible I'm a hair over identified with its author. Here are a few things that struck me:

I felt like someone had taken a giant Pink Pearl eraser and rubbed me out of the picture.

That evocative, don't you think? Calling up a kid's innocent love for office supplies as well as a mob hit image.

This always reminded me of Mom and how she called punk music "a racket." It always bummed me out that she could hear the anger but not the beauty like I did.

If only Malú could have said that to her mom and her mom could have heard it without being defensive. #sadface

I don't want to give them away, but Malú has some smart alecky alternative first rules of punk that are LOLable. Luckily for everyone, the lady who owns the local bakery, Mrs. Hidalgo, turns out to simultaneously embody punk and Latinidad. Plus, she owns a bakery and even makes vegan pastries. Malú is a vegetarian and doesn't like spicy foods or cilantro, which her mom thinks is unMexican of her.

One of my favorite moments is when Malú learns that she's got some differences from her white dad. I don't want to give everything away, and this doesn't happen until 200+ pages in. It just seems so important for half-white kids to come to terms with where their white parents can't go with them. And for the white parents of mixed race kids to see that, too. I know a lot of adults are reading this book!

Many of the adults reading this book are librarians, and they'll enjoy seeing the school librarian playing a subversive role. "Whatever happens," Mr. Baca said to us conspiratorially," I was never here." (I wish he hadn't wanted to save his own skin if the gig was up, but I still like that he was in on it.)

The book ends with another rule of punk, my favorite one yet. You'll have to read the whole thing to get to it, unless you're a cheater.