All Day: A Year of Love and Survival Teaching Incarcerated Kids at Rikers Island 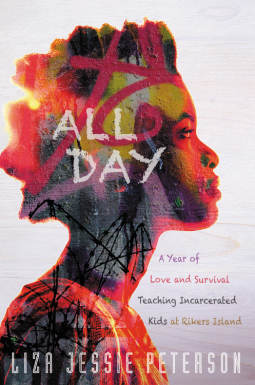 Peterson, an actor and poet living in Brooklyn, amazingly finds it hard to support herself on her art alone. Having taught workshops on Riker's Island before, she lands a short-term sub job at the end of a school year, which leads to her taking the position full-time the following fall. Hence she ends up doing a "city year" at Rikers. She defines "city year" as "the eight months an inmate serves under a twelve-month sentence" because people get days removed from their sentence if they do "good time," i.e., not get in trouble.

Peterson teaches a pre-GED class to boys mostly in the 16-19 range (at 19 they're put in with the men), though some are younger, I believe. Her classroom is crowded, so she doesn't give the ages and names of all the kids. In fact, it seems weird to me that she uses their real names, if she does. I read a digital galley in which there was no "names have been changed" statement. In case you were wondering, teaching in jail is hard. Kids have stuff going on, and prison culture is a far cry from classroom culture. Peterson knows how to roll with that though. She has a good handle on when to let things slide and at the same time how to demand respect.

Her classroom is heavy on Black culture and nurturing her students' talents. Still, she's not a saint and lets the reader know when the young men are pushing her over the edge. The students know it, too. Peterson's main struggle, though she's clearly a devoted and talented educator, is that getting to Riker's every day at 7 something a.m. is not good for her art. It pays, but not well, so are the two-hour commute, and the horrors of the criminal justice education system worth it?

She and her colleagues are committed to, as Mr. Davis puts it "...it is my duty and assignment to make sure I teach these young brothers in my class everything they need to know about who they really  are. I teach them the true history of the Black man and not those European lies that have our people lost and downright ignorant." Interestingly, these noble teachers spend their lunch hours watching the grisliest horror films possible, screaming at the screen, hurling foul-mouthed insults at the character. It's their weird release.

This memoir of course gives you a lot to think about. One piece of prison culture that touched me is how everyone has a different name on the inside. As Peterson puts it, they have the name their mama gave them, their street name, and their jail name. (There were two more, which she illustrated with Malcolm X's five names. She talks about him a lot, and the young men take a lot of inspiration from him.) But with jail names, it's like they're creating a fantasy world, I think to distance themselves from the reality, so it's happening to someone else.

There's a moving section about the 2008 election and Barack Obama's inauguration. Have read this book myself in late-January 2017, you can imagine how there was extra meaning and emotion is learning of Peterson's love for the entire Obama family. She also unpacks how Obama's Blackness, and that of his family on display is "visual kryptonite for racist white folks."

At one point the teachers are given a new--and totally unworkable--formula for teaching, and Peterson observes:

I see a diabolical setup. I was shocked, but not surprised, to learn that many states calculate the number of future prison beds they'll need based on failing reading levels of third graders. Funds are allocated based on these projections, so those beds have to be filled. It's a prison preorder. ... Kids how can't think critically or creatively usually wind up with mediocre, low-paying line-worker jobs and are more likely to toe the line and not make waves in society, like robots.

Sorry to end on that note, but it is the reality Peterson dealt with in her city year and continues to unpack in her post-Rikers teaching and artistic careers.