Unpolished Gem: My Mother, My Grandmother and Me 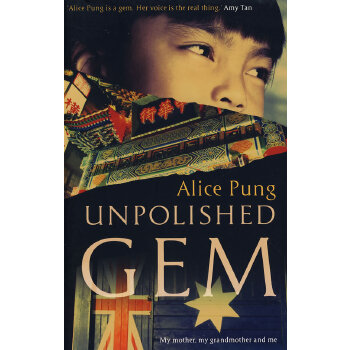 Agheare/Alice is Chinese-Australian, but this isn't her family's first migration. They lived in Vietnam and Cambodia, as well, before they made their way to the suburbs of Melbourne.

I loved some of the language in Unpolished Gem, but wasn't highly engaged. Despite writing a memoir, Pung doesn't seem to want to talk much about herself. She is better when she's sharing stories of her mother and grandmother, who are indicated in the book's subtitle.

Although [my parents] travlled through three Southeast-Asian countries by foot, nothing can prepare them for travelling up and down escalators.

Pung cracks the mystery of why girls mature faster than boys:

"Ah, Agheare is so good, she is so responsible," they would say. "We can always trust her with our children and they won't get hurt."

"Why can't Alexander do it?" I would complain to my mother.

"He doesn't know how to look after babies. He's a boy. Besides you are more responsible than he is."

I was not won over by their sedulous flattery. Girls only matured faster because they had more to do.

More on being female:

To raise a girl, I realised, you'd need gallons of Social Conditioner with added Spirit Deflator."

She's good at these distant observations, but withholds sharing more personal passages form her life that would let the reader get closer, hinting at darkness inside her. She more or less cops to my complaint, in the context of letting a boyfriend get to know her.

I tried to tell him things. Unpleasant things, but unless I made a nice anecdote out of them it wouldn't register. I knew he liked to hear the stories about the Japanese sewing machine I got for my twelfth birthday, but not the story about the pills I had to take at seventeen. As an insider, my life wasn't interesting and quirky; I was only a good storyteller, and I was running out of quirky anecdotes.