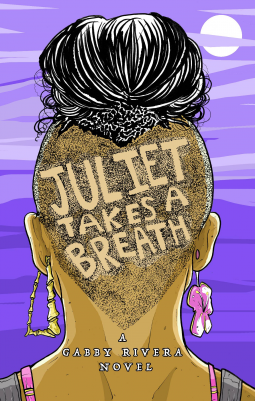 First off, perfect cover by Cristy Road, don't you think? Protagonist Juliet is looking west, to cloudy Portland OR, wearing earrings that represent two disparate sides of her personality and with her pink bra straps showing under her khaki tank top. The haircut is important to the story, too, and tells those who can tell such things before they pick up the book, that Juliet is queer. I like that in a "diverse" book--when you can tell from the cover that it's about people outside the mainstream. That should be a given, right? Too bad it's not.

Juliet Milagros Palante is a Puerto Rican college student from the Bronx who fell in love with the writings of a celebrated white feminist who has landed an internshp with this white feminist, Harlowe Brisbane, living with Harlowe in her PDX house. It's the turn of the 21st century. People have cell phones, but Juliet needs to work on the library if she wants to do internet research (and hook up with a hot "junior librarian," whatever that is. Juliet doesn't come from a wealthy family, but she's not starving. Her parents don't take to Juliet's coming out easily, but they're not total bigots.

I bring up the above, not to reveal details of Juliet's story, but to let you see that it's a complicated one. I guess dealing with imperfect people you stop idolizing often is. But finding your own crew at the same time: worth it.

I have so. many. thoughts. about this book. It's didactic in some ways, but charmingly so, and as a well-meaning white lady, I appreciate the teaching that happens for my population, even if the book is primarily meant to validate and empower young queers of color. I bookmarked about 25 passages. I'll spare you my thoughts on each of them, but I'll dig out a few for you.

Evidence of Juliet's process start at the very beginning, with a long letter to Harlowe. In it she asks, "Can a badass white lady like you make foom for me?" and asserting "...if you can question the patriarchy, then I can question you."

I appreciate that 5'3" 165lb Juliet has body pride and that her size isn't a big deal, even if her lusciousness comes up now and again. I also like Juliet's ambivalence about white girls.

White girls could be annoying but mostly they were just harmless. Sometimes it was easier to be around white girls anyway; all the things that made me weird in my neighborhood seemed cool to them.

I feel like that's a huge issue to girls of color in certain nerd and other communities, including punk activism. That's not to erase women of color in any of these communities, but maybe kids have to hunt for them because they're not widely represented.

Ain't No Party Like an Octavia Butler Writer's Workshop

The workshop is for WOC only, and even though it's 2001 (I think), it's trans inclusive. White women are allowed to attend but have to stay back.

As I mentioned above, Juliet spends a lot of time in the library and has this to say about the PDX library:

The Multnomah Libary seemed massive compared to the one at my school. It hummed with a building excitement. I was a beat in the library. Libraries are safe but also exciting. Libraries are where nerds like me go to refuel. They are safe havens where the polluted noise of the outside world, with all the bullies and bro-dudes and anti-feminist rhetoric, is shut out. Libraries have zero tolerance for bullshit. Their walls protect us and keep us safe from all the bastards that have never read a book for fun.

I object in a way to personifying the library. It's librarians and other library workers that create the magic and safety, but I love that last sentiment about bastards who have never read a book for fun. I was thinking about that recently in regards to Trump voters, that they're people who have no practice experiencing life in someone else's world. That's one of the things that reading fiction is for me.

There is stuff about periods, which of course I loved.

"Don't worry, Juliet. Let me help. I can bring you your tampons or my sacred period ritual kit," she said from behind hte door. "Which would you prefer?"

What a fucking question.

"I don't ever want to be the person that turned down a sacred period ritual kit."

I'd probably be that person, but I love that Juliet isn't, even when she's just bled on her bed in her boss's house.

I really will stop with the quotations now. I'll just say that things get hard for Juliet, and she has to process some intense stuff. Happily she finds the perfect person to help her. Primas are solid.

Rivera gives a nice shout out to libraries in her acknowledgments, also to Cristy Road's cover art and an Allied Media Conference workshop. Also solid.