In Roth's future dystopia, people are divided into five factions, based on shared aversions to particular evils (selfishness, cowardice, lies, divisiveness, and ignorance). They get to decide at age 16, whether they want to stick with the faction their parents chose or try their luck with a new one. If it were me, I'd pick Erudite, the faction that thinks that ignorance is the world's greatest problem, but it turns out that in Roth's vision, the Erudite are fascistic. 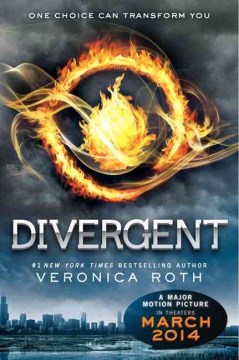 Our heroine finds herself among the punk faction, the Dauntless, but unfortunately they're more lifestylists than anarchists, except our heroine. Divergent is a quick and absorbing read, and I'm a little on edge to be one of 186 holds on the 94 copies of the sequel in the NYPL system. I'm stuck with a literary novel to keep me busy over the long Memorial Day weekend with NYPL closed for three days, shutting down my access to YA brain candy.

I just read this too! I'm

I just read this too! I'm extremely eager to pick up my crush on Four in the next one, though I'm 120something in queue.

We can talk about it in PDX

We can talk about it in PDX this weekend. Are you going to the WOC Zine Symposium?

I'm going to stop by at

I'm going to stop by at least--are you tabling?