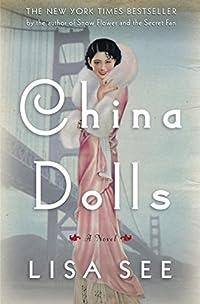 On February 19, President Roosevelt signed Executive Order 9066, which authorized the secretary of war to designate certain areas as military zones and said that he could exclude any or all persons suspected of being enemies from those places. The next day, 250 enemy aliens, mostly Japanese, were rounded up in San Francisco and sent to Bismarck, North Dakota.

I'm never not blown away by stories of Japanese internment. wtf America & FDR?

China Dolls isn't wholly about Japanese internment, but it is a factor, as is racism against Asians in general and Japanese specifically. It's also a story about friendship and betrayal. Sound soapy? It is, and it isn't. It's something of a page turner, but doesn't feel completely lite.

The narration is in three voices: Grace, a hick from Ohio, who moves to California to escape abuse and find fame; Helen, the daughter of a Chinatown muckety muck, and whose story unfolds the slowest; Ruby, a glamor girl, who doesn't mind showing a little skin.