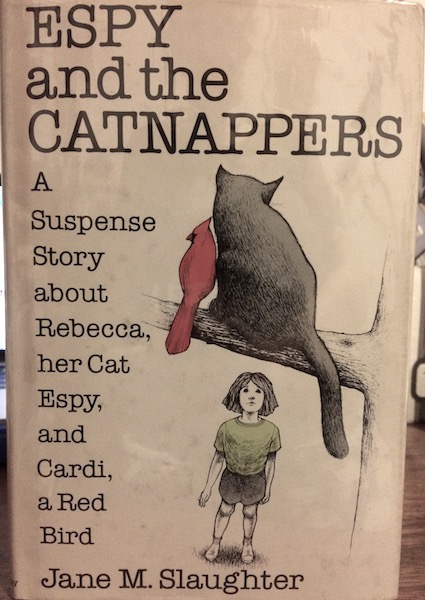 This was my favorite book for a while when I was a kid. I've always loved cats. I'd forgotten about Espy, but my sister, Susan, who has a memory as deep and strange as the ocean somehow got it into her head that Espy needed a re-read from me. I was delighted with the unexpected/no-reason gift, but I might also be a little sorry. Espy doesn't hold up.

The eponymous cat adopts Rebecca Andrews (not sure how old she is--only enough to read and write, but not a lot of agency) when she and her family move from Cambridge, MA to Durham, NC. The previous day Espy had been chucked from a car by his previous human. What a "mean old woman," as the neighbor kids called her. Published in 1975, the book has a 1950s feel to it.

"I'll straighten the kitchen for you, Taylor," said Frank Andrews. That will give you more time for the rest of your chores."

Frank is Rebecca's dad, a grad student in math and Taylor her mom, who recently gave birth to Frank Jr.

Anyway, the main plot point is that Espy, who is named for his ESP, and his friend Cardie, the cardinal are Very Special animals. Espy attracts the wrong kind of attention when his psychic abilities go viral. His previous human and her conniving brother want the cat back, so they can make him help them make money on gambling and such.

It was a fun nostalgia read, but patriarchal to the max.