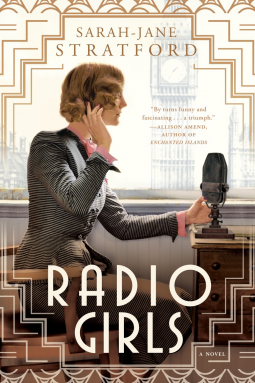 This late-1920s historical novel is about the rise of radio, women's rights, and fascism. Two of these things are connected. We follow Maisie Musgrave, a Canadian-American ex-pat living in London as she goes from mouse to maven, under the influence of real-life BBC producer Hilda Matheson.

It's funny to think of the BBC like a tech start-up, but that's exactly what it was. Engineers doing work no one has done before is part of the story. Luckily, the tech start-ups from the early part of this century didn't have to deal with CEOs asking about their moral character in their job interviews like BBCers did back in the day.

Here is Maisie coming into her own:

"If equal rights were just given from the beginning, then no one would have to fight for them on the street and create a mess," Maisie said.

"Ah, there's no arguing with the radical ladies."

"Not radical; reasonable, I think."

"Not radical; reasonble," is my new favorite response to criticisms of radicalism.

I mentioned women's rights in the beginning of this review, but taking place in Britain, it's also class-conscious. Maisie is poor, and the radical lesbian boss she so admires has no clue what that's like. It's not in her consciousness at all. Their BBC division runs a show for women voters (voting being a new thing for women at that time), and one episode focuses on gender parity in education. Meanwhile Maisie is thinking, "Why shouldn't boys and girls have the same education? The real question should be about the rich versus the poor--that would be something all right."

This doesn't seem to be a common expression, but I think it's brilliant:

"Why does the DG get so aerated about...well, everything?" Maisie asked. "I supposed his intentions are decent enough, but--"

"Yes." Hilda lit a cigarette. "His spleen is in the right place."

Aren't we always saying that some asshole is to be forgiven, tolerated, or given some understanding because their heart is in the right place? I mean, whose isn't, except for people with that backwards organs condition that TV doctors get so excited about? It's the spleen, the site of temper and spite that causes bad behavior, whether or not the person has a heart. I think that is just so clever.

Read this book and also read about Hilda Matheson. Then someone write her into Wikipedia!