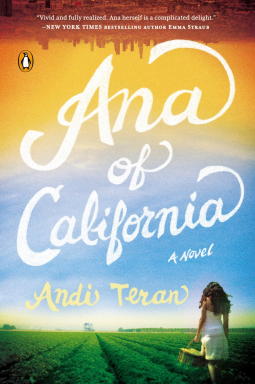 Confession: I've never read Anne of Green Gables, at least not that I can recall. I just downloaded it from NYPL, so maybe within a few days that will no longer be true. Or maybe it won't. Confession: though I read a wide range of books that are younger than I am, I don't have much patience for classics, and don't get me started on "the canon." I wish I could say that was purely because I call bullshit on white male western supremacy. That's part of it, but I also just don't care for how fussy early twentieth century and earlier writing can be.

So, Ana, not Anne, is our protagonist here. She's a gang-orphaned fifteen-year-old Latina from L.A. who has nearly exhausted her foster care options. Luckily a social worker who has a soft spot for Ana, find her a place on a farm in redwood country. Ana has never been out of L.A., or even seen the ocean, but moving away to intern until she can apply for emancipation at 16, seems like a better option than a group home.

Abbie and Emmett Garber are sibling farmers who could use a little extra help in the fields and around the house, and this being that kind of novel, they need some rescuing themselves, mostly from heartbreak, but of course the farm is in peril for a hot minute about a third of the way through.

Other characters in the Ana universe are fellow Mexican-American farmhands, her lesbian bestie, a precocious freshman, and a love interest with a motorcycle. It's a sweet novel, that takes its time, but doesn't drag. Ana is smart, observant, and has a colorful vocabulary (where colorful = southern or mountain storytelling, not dirty words). Even so, she keeps a lot inside and lives in constant fear of getting sent away, abandoned once again.

She is jealous of her friends' problems--having difficulties with their parents and the like, so she finds it hard to relate to them sometimes. Her life has been far more fucked up than theirs, so she keeps most of it in. You'll like her and join me in hoping Ana is the first of a Garber Farm series.