Black Man in a White Coat: a Doctor's Reflections on Race and Medicine 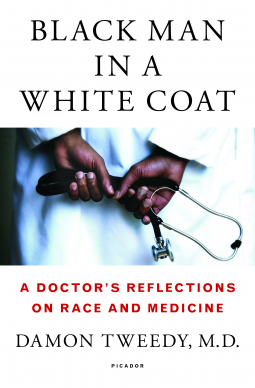 You know I don't read a lot of books written by men, less than 5% a year, but with the We Need Diverse Books challenge (I'm reading at least 50 books by POC and/or LGBTQ authors), I thought I might branch out and read the occasional book by a dude of color. I'm glad I did because Black Man in a White Coat is a thoughtful and incisive indictment of racial disparities in medicine, from how healthcare professionals are educated to systemic problems in how people of color are treated.

I digitally dogeared possibly a record fifteen pages that contained bits I wanted to remember and comment on. I'll probably exercise some restraint. ;)

Tweedy observes how in medical school races are constantly compared, and how although Asians, Hispanics, and Native Americans are referenced, the emphasis is primarily on Blacks vs. whites.

Each time the demographics of a new disease came up in a lecture, my stomach twisted. I knew where this was heading. Seated in a sea of mostly white and Asian faces, I wondered how this information affected their view of black people, where they already had biases against us, and whether this impacted the way they saw me.

Later on Tweedy questions how when presenting a patient, the first three details are age, gender and race/ethnicity and wonders whether it's essential to consider race at that level. Are medical professionals potentially loading each case with bias from the beginning, before a patient is even seen?

The book takes us through Tweedy's medical school training, internship year, and his professional practice. He reports that Blacks make up approximately 7% of the U.S. medical school population, about half their percentage of the general population of Blacks in America, and that this hasn't changed since he went to Duke in the mid-1990s. He considers his full ride at the Duke medical school to be reparations, rather than affirmative action. Btw 20% of those medical students attend predominately Black medical schools.

As Daniel Golden detailed in his 2006 book The Price of Admission, elite schools are widely know to give clear admission preferences to the children of alumni and faculty. In contrast to race-based affirmative action, the beneficiaries in these instances are overwhelmingly white, a testament to the reality that these institutions were almost exclusively white during the pre-civil rights era.

But you know what's a little funny, Tweedy refers to a "male" nurse, reinforcing a stereotype in a situation that doesn't call for identifying the practitioner's gender. He also validates the trope of doctors being taught to suck up to nurses to avoid retribution and curry favor, rather than because it's good manners and good medicine. "If a nurse didn't like you, they could wake you anytime they wanted, using the need for an unimportant order--say a three a.m. call for Gas-X for a patient who was sound asleep--as the ostensible reason." Tweedy is plenty self-reflective and self-critical, so I'm just making my own observation here, and you should know I have my own bias/preconception about doctors because of how superior they can be to other medical staff and patients.

Though race was a factor in his medical training, completely with a teacher calling on Tweedy to explain to his classmates that race was a factor in a certain scenario, Tweedy reports that the history of racism was not covered in med school. He gives plenty of examples, and the endnotes take about 50 pages. The bibliography is also extensive.

Tweedy shares a horrific story of a Black patient getting a psych diagnosis
in his chart for wanting to try lifestyle changes before adopting a medicine with gnarly side effects. At that time Tweedy was an intern and afraid to question the diagnosis for fear he'd get the same treatment--being identified as a whiner or troublemaker and thus not taken seriously for the rest of his career.

He also relates an instance where he, a 6'6 Black man dressed in a grubby shirt and sweatpants is blown off in urgent care until he identifies himself as a doctor. The care he gets 180s and becomes oversolicitous.

Tweedy is self-reflective throughout and questions how he is complicit in giving preferential treatment, not necessarily based on race, but on his ability to relate to a patient's experience. As a psychiatrist, he forces himself to do better and find a way to connect with a patient he doesn't at first seem to have common ground with--a white NASCAR guy. He figures it out and develops a good relationship with the patient and thus is better able to treat him.

I came to appreciate how the medical system itself is sometimes just as sick as its patients.