Data, a Love Story: How I Gamed Online Dating to Meet My Match

Amy Webb, a journalist and serious data geek decides she's going to meet her husband through JDate. After a few bad dates she realizes that it's going to take more than posting snippets from her résumé into her profile and responding to invitations from whatever guy seems cool to find her beshert, so she launches an obsessive data gathering operation, which ultimately works. 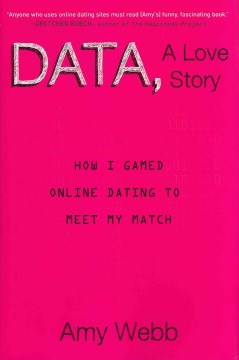 This somewhat, but not entirely self-mocking quotation gives you an idea of what Webb is all about:

"Or when, in the wee hours of the night, I made some truly stunning scatter plots. Though I know this all sounds glamorous and exciting to you, much of this work was just me, sitting at my kitchen table in a hoodie, playing with numbers."

You end up admiring Webb, even while thinking she's a bit of a nut. The book contains endnotes (yay!) and a chart of her acknowledgments, indicating for each person which of the ten factors she was thanking them for. I just wish the names had been alphabetized or in some other immediately discernible order.