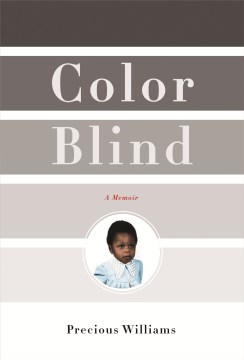 Precious Williams is a British journalist of Nigerian heritage, who was raised mostly an older white woman with a posh accent living in the poor part of some white suburbs (what's British for suburbs?). Precious's early childhood was fraught--she was placed in and out of Nanny, the white woman's care with competing siblings, and a slew of funny uncles who did her harm. Her mother, Lizzy, was beautiful and smart, but unpredictable and sometimes violent.

Precious, who is a pre-schooler when first assaulted, has no way to communicate what's been done to her.

I want to tell [my sister Agnes] what happened. But I can't. I want to tell her how I feel like I'm sliding down into someplace that's dark like the inside of a coffin, some place I can never, ever be rescued from. The right words don't come. I can't find them.

Nanny, the loving foster/adoptive parent gives Precious, known as Anita at the time, the nickname "Nin" for pickaninny. Nanny's germ-free hands are raw from relentless washings, and she can't bear for Nin to ever leave her, even to go to a prestigious university.

On being brought to Nigeria to visit her mother's family:

Maybe this *is* my home. I do miss Nanny and Gramps and Aunt Wendy and Uncle Mick; I do think about them every day. I miss them the way I miss my favourite characters in a brilliant novel once I've reached the last page, when I'm forced to admit I don't quite live in their world anymore.

Back in England, Precious longs to be around Black people, who can teach her how to "stop being a laughing stock among other blacks." Her hair is a wreck throughout most of the memoir. When she can't find Black in her all-white village, she solicits pen pals via Black Beat International and start building an epistolary international Black community for herself.

After some challenging times in her teens, Precious eventually finds IRL Black friends, gets herself a good education, and earns success as a journalist. It's not free, though; she loses something important along the way. Her acknowledgments at the end made me feel sad.