Out of Orange: a Memoir 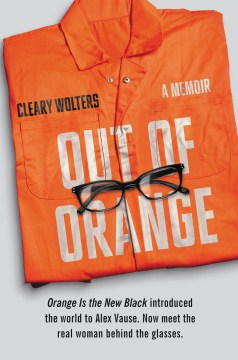 Wolters is the character depicted in Piper Kerman's prison memoir Orange Is the New Black book as Nora Jansen and TV series as Alex Vause. She heard about the book and the series once they were fact, after having no contact with Kerman since they met to testify against a fellow defendant about a year into Kerman's sentence.

Wolters's memoir gives the details of the drug business that Kerman's doesn't reveal, which makes sense, since Wolters was the one on the inside and Kerman merely a courier. Wolters isn't the writer Kerman is, and definitely didn't have comparable editing help, as evidenced by little things like copy errors and big things, like the book being about 50 pages too long.

She is funny sometimes, though, like when she describes Northampton as Norman Rockwellesque, but with a lot of lesbians. I also smiled at the title of chapter three: U-Haul, We Haul, We All Fall Down.

I was disappointed that Wolters repeatedly refers to the head of the drug operation, Alajeh, as living in Africa, rather than Benin (she says Benin once, where Kerman refers to Western Africa and Benin, but never Africa, which is a continent). She once describes Alajeh as wearing "African garb," which I find, if not outright racist, xenophobic or something.

Like Kerman, Wolters details the illogic of prison life and regulations, noting that in federal prison, as an infraction, sex is on par with assault and rioting.

At one point Wolters gets bad news about a family member and is told by the prison chaplain not to be too emotional or the chaplain will be forced to send Wolters to the SHU ("Special" Housing Unit aka solitary aka punitive).

The best thing about Wolters is that she's a total cat lady, even BFFing a kitty in prison.

For an outdoor cat, Patches was becoming quite domesticated and spoiled. She was a smart little shit too. She knew she was not supposed to be inside the housing unit. When the guards came around to count us at night, she would either crawl under my blanket or jump down and hide behind the curtain in our window.