Joey's gender transition stories are everything that you could want in a minicomic. They're honest, well-drawn, compelling, and at least once an issue, LOL funny. I don't say LOL casually, I actually mean it. The strip that got me in issue one is the 4th installment of Joey's conversation with herself, "Am I a bitch now?" about whether her now passing and openly identifying as female--and taking hormones--has, you know. If that scares you, know that this isn't an attack on assertive womanhood. Check out the first installment, and you'll understand:

C's full-color handwritten and illustrated mini- 24-hourish perzine depicts her winter solstice day-in-the-life. She does a holiday craft project, but is unsuccessful at luring her son to participate--no Norman Rockwell memories for Emiliano! The next page is colored in saffron to match some Buddhist monks Celia saw waiting on the el train platform with her. She goes on to list and draw things she saw and heard in her travels that day and the contents of the single bag of stuff she bought at Whole Foods that set her back more than $80. There are also little anecdotes, music-inspired memories, and train haiku (morning meal is a / half gallon of Kemp's milk and / a "shut the fuck up").

Last year the 50something unemployed school librarian took off on a European grand tour, starting with three months in Brest, studying French. This is my favorite issue so far of E-Zine. Elaine's narrative has more of a thru-line than in the past (my hang-up, not hers!), which contrast nicely with her collage-y visual style. There are photos and little handwritten notes and handstamped stamps throughout. I love the purple pen nib on the back, especially.

Oh, Katie. I love your zines so much and the latest issue of White Elephants possibly even the most of all, because it's your most personal. Like much personal writing, zines can be full of complaints, insecurity, and calling people out on their evil ways, and while there's nothing wrong with that, it's rather nice to read a mostly happy zine. The framework of WE4 is Katie's descriptions of her yard sale & flea market shopping, but as she asks near the end "Is this zine even about yard sales anymore?" It once was, and probably will be again, but for issue 4, something happens that eclipses Katie's joy over finding weird textbooks to repurpose into stationery, knickknacks with the previous owners' history attached or imagined, and vintage clothing items whose worth or potential can be ferreted out only by artisan shoppers such as herself. What Katie finds in this zine is love, revealing a little bit more about it with each section. Zine World is awesome. That is all for now because this review is severely overdue.

I loved this issue of QZAP:META from the old skool looking front cover photo of sailors making out to the anthemic back cover drawing of a large naked women by Mara Schnookums proclaiming "Any sex I have is queer sex any zine I make is a queer zine." Nerdslut Milo Miller's introduction lays out what it is to record one's life and struggles in zines and to preserve them in libraries and archives. Ze identifies the Queer Zine Archive Project, QZAP, as "part of a vast Yellow Submarine fleet of libraries, archives, and infoshops that all recognize the importance of saving and sharing populist and underground media." Ze makes me feel so proud to be part of that! The essays in the zine ride the activist/academic line in the most delicious way. Plus there's art. What's not to love?

Issue #16 of her Syndicate Product series is A.j.'s spectacular 24-hour zine about her not particularly rational, but surprisingly powerful desire to live in California. LA, even. I can't believe how moved and awed I was at this work, created in 19.5 hours. A.j., an obvious perfectionist, regrets sleeping from 1-5:30 a.m., but I can't imagine the zine being any better with another 4.5 hours' worth of work. 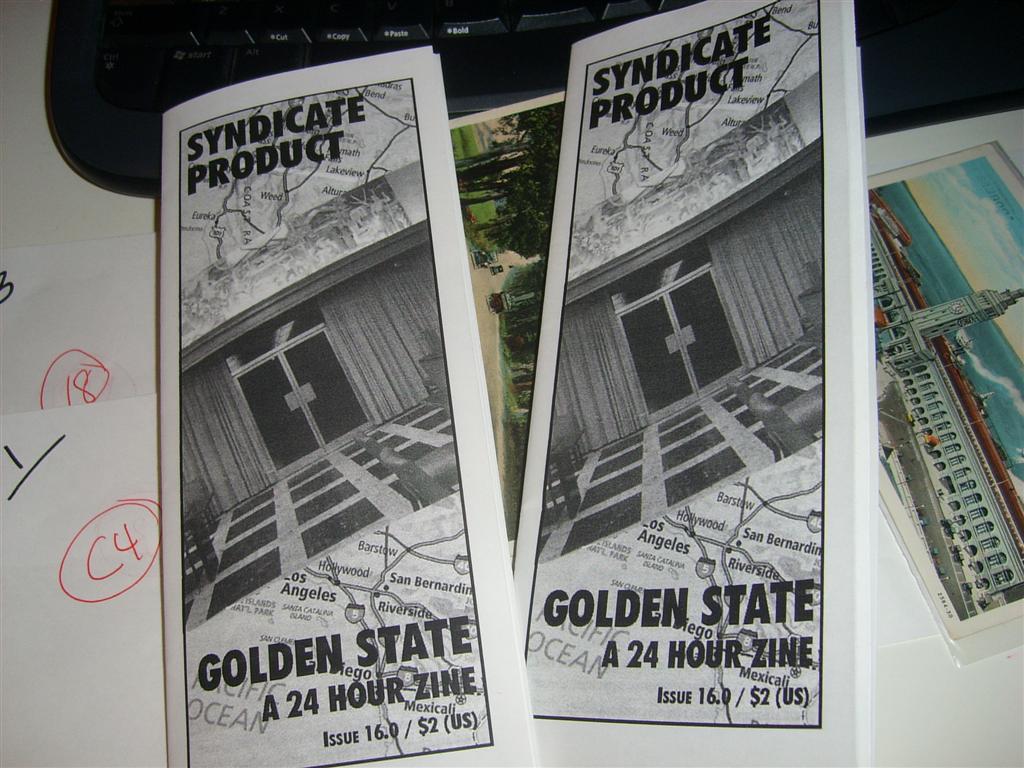 Just when I'm getting jaded about zines, reading and cataloging 50 of them a week, it's nice to discover a new favorite zinester. I don't understand why Thara Harris isn't more of a zine superstar, not that "superstar" is really a concept that should be associated with zines. But you know what I mean, there are some zinesters that become widely known in our small community for producing well-made, thoughtful, creative, and visually appealing works. Ms. Harris, from West Virginia is one of those writer/artists. Or maybe she does have a rep, and I just didn't know about it for whatever reason? I can't really tell because she doesn't have that much of a web presence.

But at the same time I'm not ready to throw labels completely out. Look at the people in the US who want government to stop keeping statistics on race. What would happen? You wouldn't be able to point out, for example, that the worst-performing schools with the least resources happened to have predominantly students of color, or that police stop people of a certain race way out of proportion to their population in the community...because you wouldn't be allowed to keep track. Ignoring race doesn't make racism go away.

I also think the focus on getting rid of labels is part of a homogenizing "colorblind" approach to race that has liberals pretending there's no cultural differences between people, which is offensive & blatantly not true or helpful.

Johanna, one of my favorite zine publishers, hadn't made a zine since issue 4 of Sisu came out in May 2006. For some reason, although I acquired No History, No Self from StrangerDanger back in November, I didn't get around to reading it until just now. (I have a serious cataloging backlog problem, which I hope to clear up by the end of the year!) I'm a fool for letting it go so long, but at least I finally read it. Like all of Johanna's zines, NHNS has strong political content, particularly regarding race, mixed race identity, and identity politics. She has put in her time as an activist and has plenty of cred in that arena (also in feminist science-fiction and vegan communities), so what is particularly affecting to me in this new zines venture is how personal and open she is, about missing New York, trying to make friends, being depressed and contemplating therapy. She lists some great self-care suggestions for dealing with depression, the top three being sleep, cats, and tea, things I can totally get behind. That emphasis on self-care I think in this case extends to the rest of the world. NHNS is gentler than its predecessors. Johanna, who doesn't suffer fools lightly, is more inwardly focused this time around, maybe because repatriated to the UK she's missing her friends from home around whom she can actually be herself. Reading this zine I wanted to give Johanna a hug. I also want to know when issue 2 will be out.

Another zine by Celia that makes you adore zines despite that fact that you are reading and cataloging 50 of them per weekend! Well, maybe that's just me, but I would think that anyone would appreciate la C-Dog's birthday creation regardless of how immersed to the scalp they may or may not be in zines.