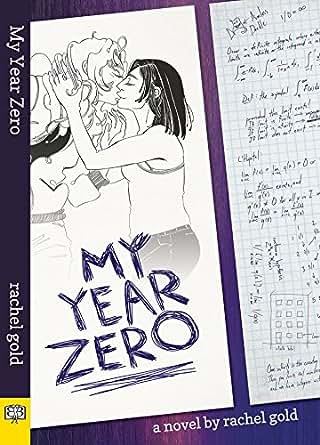 Sadly, this is the last book in my Rachel Gold binge until she writes a new one. This time the protagonist is a cisgender lesbian. I get how writing only about transwomen would get tiring since in the current state of the world every trans teen novel would have to be about Being Trans, rather than just living one's life and trying to find romance. That reality is telling unto itself.

My Year Zero is the sexiest of the three, though/because it start with the protagonist declaring that at 16 she decides it's high time she get herself laid. Lauren is living in Duluth, of all places, and there are just a few out lesbians in town, so local prospects aren't good. Then she meets a hottie (with a boyfriend) from the Twin Cities, and things start to change for her. Duluth is barren in more ways than its "fourteen months of winter." Lauren lives with her emotionally and often physically unavailable father. Her brother is in school on the east coast, and her mom is doing good in Afghanistan.

It's not surprising that she'd be excitied about the hottie Sierra's group fantasy writing project. Sierra and her friends in the Cities write a shared world with queens and kings and intrigue of all kind, including sexual. Sierra mentions her boyfriend Dustin and her best friend Blake early on in her converstaions with Lauren, including that Blake has bipolar disorder.

There is a lot going on in this story--love, abuse, neglect, sex, math, and art. It's not hard to keep track of it all, but I felt like the part about Lauren's emotional life could have had a better foundation in the beginning. It's still well told. I like this passage:

"Sierra said I was cold and distant and you say I'm flat.

"Don't combine those. Flat is what you do, it's not who you are."